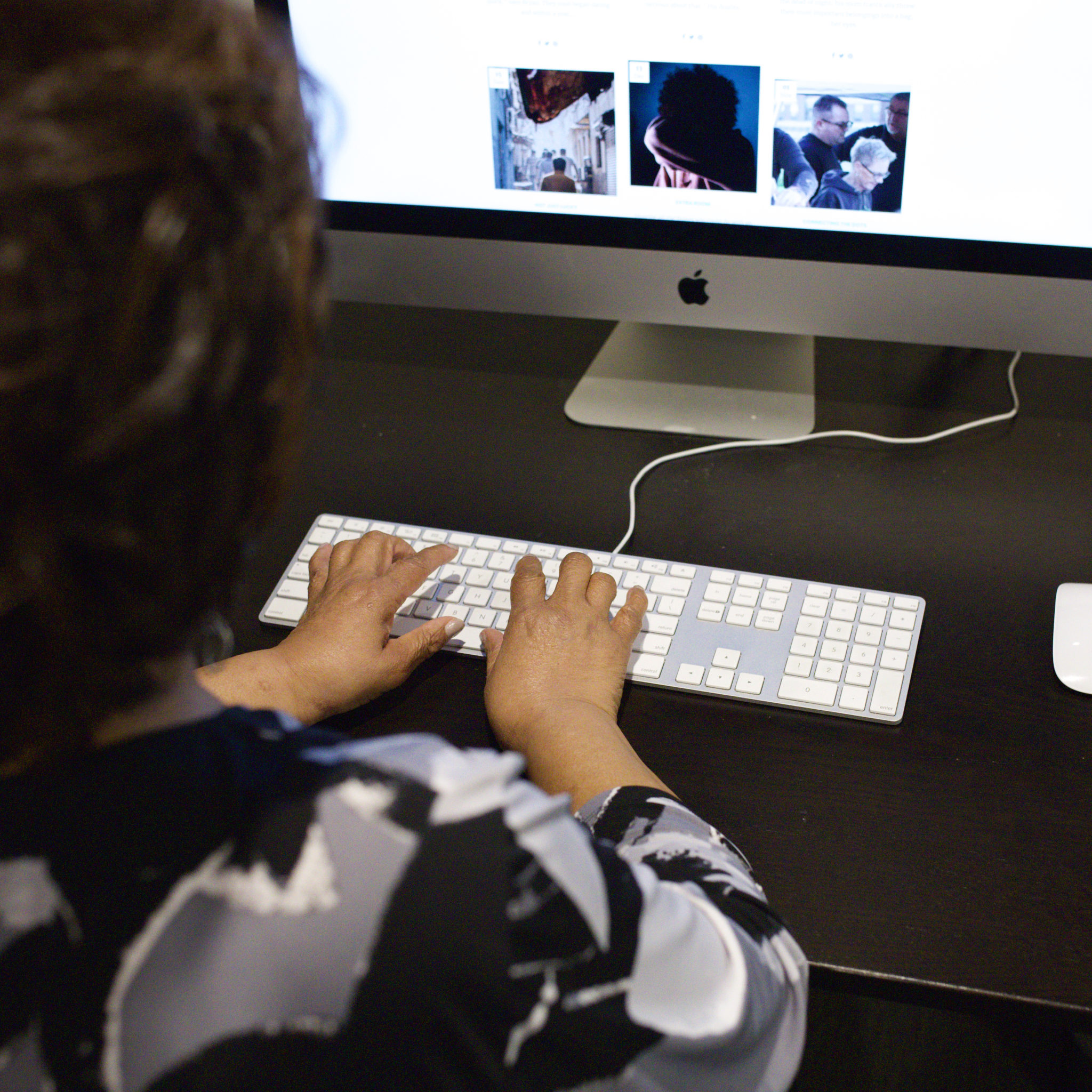 Posted at 18:29h in Stories by Staff Writer Kristin Crawford

“Lights out. Go to sleep. You’ve got to get up in the morning,” Gloria’s mom would say. Off would go the main lights. But when the coast was clear, Gloria would pull the covers over her head and by the glow of a flashlight, get lost in the make-believe world of her books. “I just loved it,” she says, “I had to do it.”

Her love for literature continued as she got older. She started entering writing contests in middle school, penning her favorite kind of stories: romance. “I remember one specific time, it was actually a ten dollar bill in the mail that I’d won. I won, and I was very proud of myself.”

Growing up, Gloria did not give much thought to how writing could become a driving force over the course of her life. She simply knew she enjoyed it. “I loved writing. I don’t think it clicked in me that I’m going to one day write,” she says.

After high school, Gloria packed her bags and headed from Florida to Michigan. She decided to pursue a college degree in journalism and soon got a gig writing for her college newspaper. It was there that she began to discover a fascination with a different type of storytelling from the fiction she had always read growing up: the telling of real-life stories. “I think the genre changed me. Real life mirrors fiction,” she says, “Like it can’t be true, but it is true. It’s someone’s [life]. [To] know it actually happened to someone, it has more meaning to me.”

After college, she moved with her husband back to Florida, full of passion. “With my fresh journalism degree, I was going to make the world shake,” she says, “I was going to start doing stuff that’s fantastic with my writing.” She got hired at a small community newspaper and hit the ground running. “I [started] doing everything involved in producing a newspaper. I learned how to run the presses. I had a manual typewriter. That was in the early ’80s. It was grueling work and sometimes it was 12, 14-hour days because I’d go to the city council meetings at night. It was a lot of work.”

Gloria continues, “It wasn’t good pay, but I wanted to stick it out. I wanted to get as much knowledge that I possibly could.” She pauses, “Then reality hit. The ends were not meeting financially.” Gloria knew she had to find a different way to continue writing while still keeping the lights on. She found a job writing contracts for the Commonwealth of Massachusetts. “The love for writing never ended. It just took on a different look,” she says, “I would use some of the writing techniques [I had learned] to entice the purchasers to use the contracts.”

She also found other ways to scratch her creative itch. “I honed in. I kept going,” she says. She volunteered to help several churches with their newsletters each month, editing heart-felt letters from pastors to their congregations. Gloria says, “I think it helped to keep people connected to what was going on.”

When Gloria retired, she kept her eyes open for chances to continue writing. Reflecting back over the course of her life, she remarks that she had always been able to find them somehow. “It seemed like every place I went, there was an opportunity to write in some capacity,” she says.

It was at Behind the Scenes, an event aimed at giving people a chance to see all the different serving opportunities at Grace Church, that she heard that the communications team was looking for writers. Then it clicked. “It just seemed like it was just a perfect fit for what I like to do.”

She quickly signed up to become a part of the team and wrote her first story about a serving team member at Grace Church named Tony and his wife Kim. Comparing the experience to her days interviewing political officials as a newspaper journalist, Gloria was happy to discover how much easier it was to interview someone sharing their story about God. “He was already willing to talk. He was just open. It wasn’t pulling information out of him. It just flowed,” she says, “He had such an interesting story. I was so happy to do it.”

In her time with the team, Gloria has found that story writing has not only provided her with an outlet for writing, it has also encouraged her spiritually. “I’m thankful for people that tell their story. Hearing testimonies of what God has done in other people’s lives, it just encourages. I love real-life stories. There’s so many amazing things that are happening. It confirms what I already know: that God is with us.”

These days, Gloria continues to write stories with the writing team and hopes that in doing so, it will encourage others to use their gifts and passions as well. “Everyone has some gift,” she says, “I’ve always felt like writing was my gift. I want to use mine in a way that pleases [God]. Whatever God gives you, that is what He wants you to use. It honors Him because you’re saying to Him, ‘Thank you, and this is what I give back to you.'”

Want to find a service team that fits your gifts or passions? Discover one that suits you with this easy quiz.