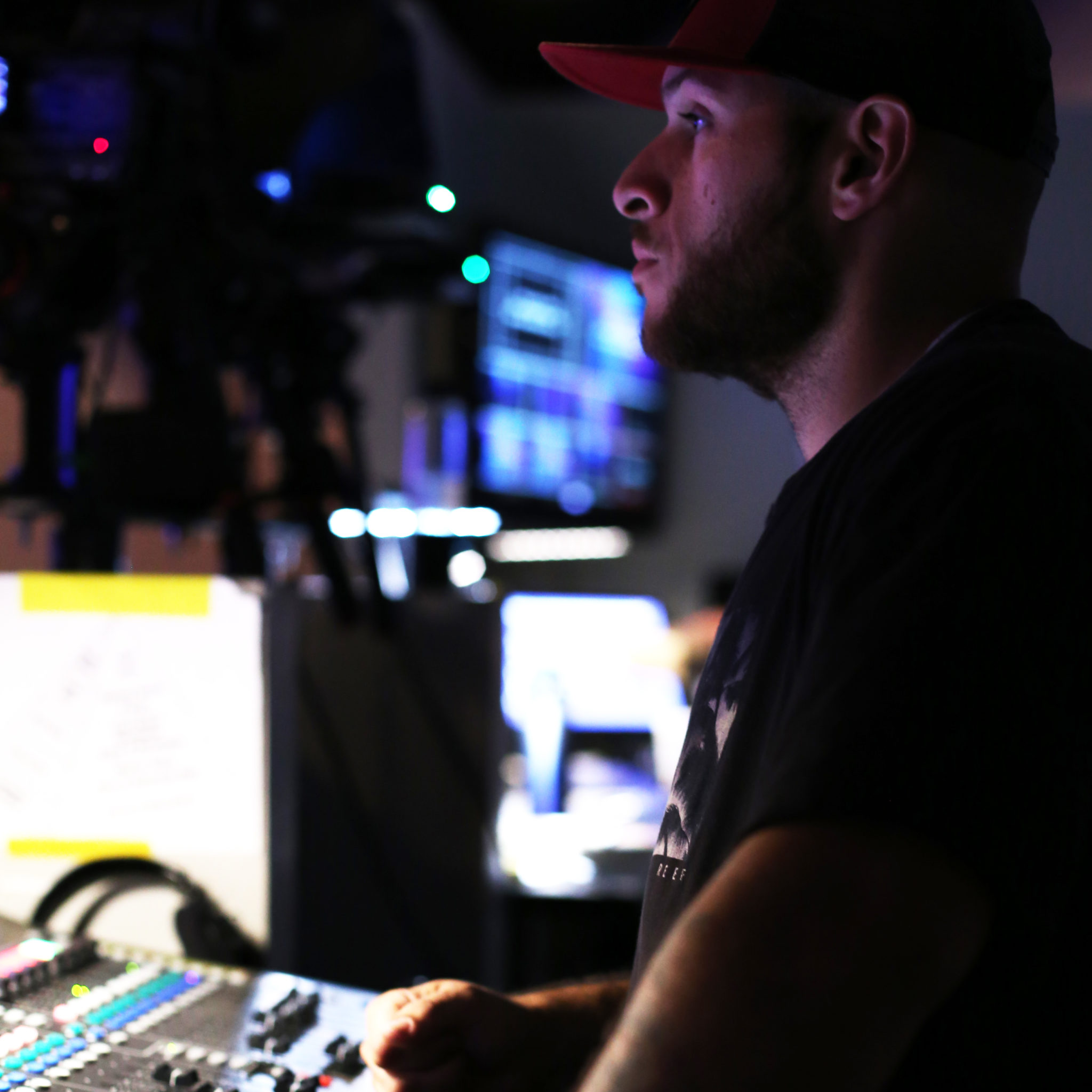 Posted at 14:15h in Stories by Staff Writer Kristin Crawford

When Eric first steps into the audio booth before weekend services at Grace Church, the auditorium is quiet, except for the low rumble of the air conditioner. In an hour and a half, the room will be filled with the roar of music and bustling families. But Eric won’t have to wait that long for the energy in the room to build. Within minutes, other team members from the audio and media teams have filed into the booth overlooking the auditorium. The teams contain only a handful of people, but they provide enough laughter and banter to make an empty auditorium feel completely full of life.

Looking back, Eric didn’t always envision himself serving specifically with the audio team. “I felt the desire to serve, but I wasn’t sure where,” says Eric, “I had many conversations with my wife discussing different areas in the church but didn’t know what to do.” Then Eric signed up to attend a men’s retreat at Grace Church, hoping to create friendships. That’s where he met a leader for the audio team named Joe. Joe explained the role of audio and media in the weekend worship services. As a huge music lover, Eric found himself excited. He says, “I felt God was making it clear where I would be most impactful.”

Eric decided to start training for the audio team.

Today, as the worship team arrives and begins practicing, Eric starts equalizing each instrument and vocal track, a practice that once seemed so intimidating. “I was most worried of messing up,” says Eric, “I didn’t want to mess up the worship team on stage or making a blaring mistake during worship time. Have you seen that sound board? It is very complex looking!”

But the more he trained, the more Eric’s fears began to subside. He says, “[My team leaders] had a huge role in my comfort with the board because of the knowledge, confidence, and positivity they have. They were not greedy with it, but poured some in my cup too, so it helped me build confidence in what I was doing.” Their support helped him remain cool even when he made mistakes. “I’ve made a few,” he says, “I’m growing at Grace because you learn from mistakes. You’re surrounded by people that want to see you grow.”

Now Eric is standing at the sound board, alternating between talking into his headset with the band on stage and cracking jokes with his team members in the booth between sets. He seems perfectly at ease, like he’s among family.  Eric says, “My favorite part of weekend serving is getting the teams together for a few hours, spending time not only in prayer but in laughter and fun.” As someone who describes himself as an introvert, he doesn’t usually feel that kind of connection with people right away, though it’s exactly what he’d been seeking when he first attended that men’s retreat long ago.

To his delight, Eric has not only has found a place to serve where he feels he’s contributing to God’s plan, but he has found the strong friendships he’s always wanted in the process. “Being a part of something that’s bigger than me and being able to pray for others on the teams has had a positive impact on my spiritual life,” says Eric, “There are so many awesome people in the media and audio teams that have challenged me spiritually and personally.” He continues, “Having a group of fellow believers in Jesus who are invested in me in tangible ways and come alongside in times of trouble has been something that I had been lacking in my journey.”

Interested in joining one of our technical or creative teams at Grace Church? Fill out this quick form and we’ll get you started!